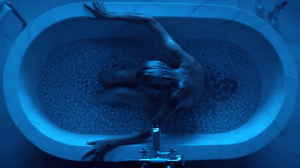 Only last week I was still worried about my sexuality.
I didn’t masturbate anymore.
Or very little.
I knew I felt better at times when I did masturbate and preferably daily.
But I just couldn’t make myself.
It probably started when the scaffolding was up, and I couldn’t lie in bed in private unless I closed the curtains.
Which were extra dark and heavy, to protect me from prying eyes.
But the only times I went to bed was to nap if I was particularly sleep deprived from a combination of not being able to sleep due to all the stress,
and still wanting to get up early, either because they needed to be in my house.
Or because I wanted to be dressed and behind my desk the time the construction workers started their work on the outside of the building.
Still in the dark.
Sun doesn’t get up until 8.30
The past few weeks were pretty sleep-deprived due to the more or less involuntary early start on weekdays so when my head hit the pillow all I wanted to do was sleep.
Perhaps the overnight recovery of my libido was because they all left for their 2 week holiday recess.
But the past couple of days my sexuality is right back where I left it, plus more.
I masturbate every day and the orgasms are deeper than they used to be.
The leap is comparable to around the time I was thirty, when the same thing happened. I was in a long-term relationship but just like now my sex-life hardly included any real sex.
I felt the change based on masturbation alone.
I have that same leap in sexual zest right now.
The improvement surprised me because after twelve years of giving my single love life my undivided attention, I had just changed direction.
From now on I was focused on becoming the first Dutch 7-figure rock star writer, and my secret lover Mr.Big could just go do whatever he wanted because being dependent on when he had time, had figured things out, or waiting for him to come around, was no longer satisfying.
I wasn’t saying that I would never see him again.
Nor that I didn’t love him anymore.
But I had decided that I wasn’t going to WAIT.
FIT IN.
BEND OVER THE FUCK BACKWARDS TO HAVE SEX WITH THE MAN I LOVE.
I needed all my energy, sanity and self-esteem for this new goal I had.
In theory, and this is all hypothetical, I could become one of those strong career women who have carefree, satisfying sex, with a variety of lovers.
Late at night, after a hard day of work, when she needs to relax and texts a man if he fancies a drink.
But I don’t do carefree.
I don’t do low-maintenance.
Mainly because I put in so much work and effort in order to have a good time.
With most men I had to do the mental work, the making-conversation AND creating the environment and mindset/idea which would make make me want to have sex.
I ve been good at sex because I could let go, or compensate for everything the other person wasn’t able to deliver. Or for every feeling that I lacked for him.
Intimacy.
Emotions.
Arousal.
If I needed to I could spin the whole entire thing.
But this also means that sex for me is draining, a lot of fucking work.
I m sure that in those twelve years I ve had multiple lovers who did do more than their share.
But at this point in my life, having renounced the entire concept that I m ever going to do his work, make his excuses, and settle for anyone who’s not emotionally mature enough, not interested enough, not socially skilled enough to make the whole entire thing work like fricking magic?
I just can’t think of anyone.
In my mind my entire sex life, including the four years with Mr.Big, have been about me putting in effort, and them just leaning back into their flaws and insecurities.
Not gonna do that ever again.
My relationship with Mr.Big was different from all the other ones not just because I felt attracted to him, and also because he was really good when we were together.
The moments we were actually together – I never had to do his work.
With him I had to work when we weren’t.
But after four years, and experiencing another level of being excluded from his life, I m done playing this game.
I m losing.
Where I once enjoyed having him in my life, without being thrown out like all his other side-dates;
And without jeopardizing his marriage, which was obviously important to him or he would have divorced her;
Something has changed.
And I would be very surprised if that started with me having enough.
I would be giving myself too much credit.
I think it started with him giving me less, and me ultimately starting to feel unwanted.
I decided last week I was not going to invest anything in my love life again, and focus entirely on my career.
And what happened?
My sexuality restored.
ALL with fantasies based on Mr.Big and me.
There have been times in my life when I have tried to quit masturbating to him. So that if he would end things with me, I wouldn’t lose my favorite masturbation fantasies along with it.
But now I see something else happened.
I have completely internalized our sex life. Him and me.
I can actually afford not investing in our flaky lover/mistress relationship, and also let him be with whomever he wants to be.
I don’t need him for the best love life ever.
I ve got everything I need right here, in my head.
I don’t need him any more than he needs me.

Subscribe to get inspired!
And feel free to unsubscribe, resubscribe, ignore,
and binge as often as you want!
The subscribe button is somewhere on this page

My diaries en erotica are available at
my BOOK SHOP
25% discount on all prices
If you check your cart, you can select your store
f.e. Nederland or United States
with the flag in the upper right corner.

I quit writing (about my love life)

Project M. and in particular its last chapter Like a Prayer is my final diary for an indefinite period of time.

I ve been writing about my love life, pretty much non-stop, since 2006, the moment I became single. And although it has brought me many things – in particular the opportunity to have relationships that are way out of my league – it has now started to constrict me.
The cage of self-reflection and transparency, that I built to protect myself, has become a prison.
I need to start living, and start experiencing life, without the pen.
Or at least without diary writing/ blogging about my real life.

One English book with columns:
I M NOT CHANGING MY FUCKING SHOW

One English book about Mistresshood:
The Big Mistress

And one diary 2017-2018, called Reboot.
Which will also include my last diary Project M.