I can’t believe I missed this!

Twice a week hard rock cafe, I don’t care how bad it is for my productivity.
Or my wallet.
I don’t even care about the state of shock I m going to be in when my theory proves to be wrong and I end up in bed with another man.
Because the theory is this:
I am sex repellent.

And the reason is simple:
I am sex repellent because I am already in love with two men: Bear (of course!) and Nikki.
Just that I didn’t think writing each other counted.

This realization, that not seeing each other was not and probably never has been, enough to prevent me from falling in love with Nikki, puts the hard rock cafe gatherings in a new light.
Because there are two guys there with whom I flirt a lot, and yet nothing ever happens. Or “nothing”? Well, we do this:
– flirting as if we want to set the ceiling on fire
– touching
– rubbing. Rubbing! I mean with my butt to a passing penis, and I ve felt a leg between my legs from the front. It’s honestly so sexual that I could come if I wanted to.

Most of these incidents were from before the place was closed for 6 weeks or something, because of unclear circumstances.
It’s still not as busy as it was before that, so there is less chance to rub each other when passing.

So I have this with two men, they’re both in their 20s just like me. One is blonde, one dark, and they even know each other. I don’t know how, but they don’t rival or anything. At one point they even sat next to me on the bench, one on either side.

I ve been at the point of thinking about nicknames for them, for in this diary. But I never have because I think we should at least kiss, before I give them the honor of having their own nickname and their own story line in my diary.

New theory is that will not happen!

I think subconsciously, I ve known I was in love with Nikki. I knew that together with Bear, that meant my heart was more than spoken for, and dating other men was pointless.
That I would not enjoy the sex and that in all likeliness?
They have not been the ones sabotaging and vetoing our flirting from becoming more. 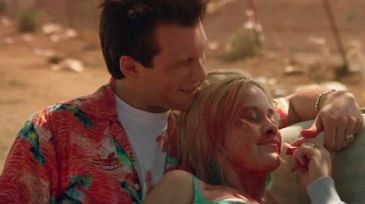 Nikki is 29!
And he’s from California!
I can’t believe I called him but I did. At his work. I have the number because the packages are sent from his store, or at least the store where he works. But now I know it is his store!

I always imagined him working there a bit like that guy in True Romance, although that was a comic store. Working in a record store has got to be the coolest thing in the world.

I called him there today, on a Saturday. Even though I knew that was definitely the worst day to call. But yesterday I cried all day and I just needed to speak to him.
Thursday night was crap.
Nothing bad happened or anything, but that’s the point: The two guys were there, and we had an okay time at the hard rock cafe, yet I felt so numb inside. I had been desperate to numb out the feelings of having fallen in love with Nikki over us writing letters.
And to repeat going out and drinking tomorrow.
Now that I knew what I was suffering from, I prescribed myself twice a week of alcohol, hard rock music and male company.

Until I sat there and the numbness around my heart was even worse than the pain I had felt. Not only was I no longer interested in the people there or in the two guys, I could not even reach my feelings for Bear. Yet every time I thought of Nikki, I felt a sharp pain. I could feel tears welling up of how fucked up the situation was, and I left.
There was a full moon on my bike ride home.

Like I said Friday was a bad day. I felt so love sick, even though no one broke up with me.
All I wanted was to be normal, have someone to hold me and call me his and call him mine.
Normal shit. Shit I normally would not want for the world.

Nikki has a girlfriend, so that made it extra hopeless. Aside from him living in England and me here.
Yesterday night I decided I would call him today to tell him I had fallen in love. I just could not reply to his letter, as if nothing had changed.
It felt dishonest, and as if everything I would write would be a lie.

And I also needed someone to tell me it would be alright. But of course I knew I risked having someone tell me he did not have time for me, and be irritated I had called.
Yet as soon as I decided I would do it, I calmed down and had a good night sleep.

So I called him this morning and it was so cool!
Wow…. bad news is I am more in love than ever!

He has a really beautiful voice, but he’s not English!! He doesn’t have a British accent and so that’s when we got into this conversation about where he was from, and I was a bit upset that he had not told me he wasn’t English but he just said:
“You didn’t ask!” and laughed.
He has a wonderful laugh!

So although there was an unspoken agreement that I would not call again, it was so great to hear his voice and speak to him. And I told him I had fallen in love, and felt so bad over it, like I had fucked things up.
But he just said something like that it didn’t matter. But in a sweet way, not a mean way. It was clear he wanted to keep writing each other.
And he mentioned taking a cold shower which made me laugh, even though I was crying at that moment because I was so relieved he wasn’t angry.

I don’t know how everything will go from here. I have his wonderful letter to reply to, maybe I ll do that this weekend or maybe I will savor it a bit and postpone to next week.
But I will not be going to the hard rock cafe anymore. It is pointless, since I m not interested in other men any way. And Bear too, I don’t feel anything at this moment. I m completely neutral about the whole thing. I don’t identify as the person he has sex with, I feel I am a friend he occasionally visits.
And he may or may not.
It’s nice to not feel that involved. Having one man with whom emotions have run rampant is more than enough.

Nikki didn’t use any sex words, I think there must have been customers in the shop browsing. I could hear he was doing things, which gave the impression he had crying girls calling him all the time and that it wasn’t something that upset nor even surprised him.
I think he was holding the receiver between shoulder and ear.
When our conversation became lighter and I knew we’d be okay, Nikki said:
“Do you remember what you wrote, about what you do with guys…? To get to know them?”
“Meet their dick!” I yelled, relieved because I assumed we were flirting now.
“Just a sec,” he said, putting the receiver down to help someone pay for their record.
It was so nice to hear him talk to a real customer!
They talked about the record, and I could hear the tinkle of the cash register. And then he was back.

“Yeah, that thing,” he said to announce he was back. “Well, you don’t even know that about me. Could be awful!”
I laughed: “I seriously doubt that, but thank you for your concern.”
“My pleasure,” he said, as if he had really done something remarkable. And he had! I feel so much better. As miserable as I was yesterday and as bad as Thursday night was, I feel I could conquer the world right now.

“And take that cold shower,” were his last words.
“I will,” were mine.

.
~Lauren96
An unexamined life is not worth living

New diary entries are posted on my Facebook page ;
And are published together, here on this blog.