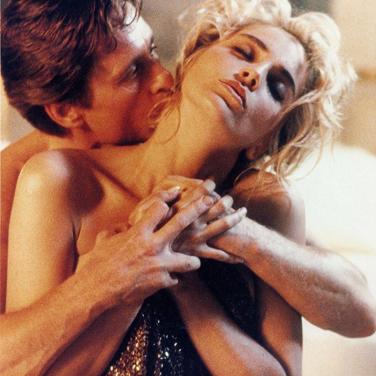 Catherine Tramell is my identity as Lauren Harteveld

Madonna is my identity as a yoga teacher

This is a letter to my creativity coach Sara
Before our call I always give her a headsup..

Detective Nick Curran;
“I love it. She’s got a hundred million bucks, she fucks fighters and rock n’ roll stars and she’s got a degree in screwing people’s heads”

Luitenant Walker:
“You forgot about her degree in literature. She’s a writer. She published a novel last year under a pen name. “

When I concluded on my last call that I AM a yoga teacher, and I AM a writer, I knew I was wrong in the sense that just focusing on these two skills, would not bring me the life I wanted.
After all, in the list of 7 values that I wrote you last time, self-expression is at number 4;
Both yoga and writing are tools of self-expression to me.
Using yoga as a tool of self-expression probably deserves a whole separate blog post, but I will now just accept that that is what it is to me.

The list of priorities is serving me greatly, in making decisions or explaining things which I feel I got wrong.
The list was a boiled down version from 12 values I initially had, to 7. And by heart, they were;
1. Love
The most intimate circle including my pets.
2. Freedom
Including financial freedom. Sexual freedom and creative freedom, are reinforced at 3 and 4.
3. Sex
Full sexual expression.
4. Self-expression
Including writing and yoga.
5. Body
My health and using my body as part of my performance/ art.
6. Fun
Including going to concerts and movies, rock music, studying history. I guess this is more the consumer side of it, whereas self-expression is the creator side of my art.
7. Status
This is the part of my career that is visible to the outside world.

So like I said, yoga is part of 4;
Self-expression.

Yoga was brought to me by Madonna which in retrospect only appealed to me because she is a performer.
Madonna expresses herself through her body, through how she moves. and how she speaks.
In 1998 she told she had started doing yoga. And I understood that just like dance, yoga was a path to start using my body as a way to express myself.

It didn’t work that out right away, because nobody uses yoga that way so how could I know that aspect had been what had appealed to me? And I did end up losing 25 years.
But now that I am rebuilding my yoga career?
Then yes.
I need to get back to the understanding I had that yoga is a tool for self-expression to me.
And that I will be a yoga teacher who teaches yoga, as a way to express yourself through your body.

This is also a good place to side-note that the insight that I am a yoga teacher and a writer, was also not complete because there was a third component missing;
The business side of it.

But as I understand now, just like with yoga, I failed to see that I felt drawn to having a business as a tool for self-expression. In particular the marketing of it!
And just like yoga, businesses are rarely used or seen as a tool of self-expression. And again I lost valuable years here trying to “build” a business, the way others do.
Where now I can see that writing AND yoga AND running a business all serve the same purpose;
To express myself.

And that all three are necessary and vital to my well-being.
They’re all essential and none of them have to make me money, not having a business either. They serve a higher purpose.

Writing and teaching yoga are to me, what painting and sculpting are to visual artists who exercise two skills.
And having a business, meaning in particular communicating through marketing, selling and social media posts;
That is also part of my art.

I will never stop my marketing, anymore than I will stop teaching yoga or writing.
In fact, that I did stop marketing and daily messaging for my Lauren Harteveld account, because I “merely”  write here, and how that resulted in my writing decimating in 2021 and 2022, proves that there can be no creativity without the marketing, the messaging, and the very public part of being on social media.

Social media and marketing are what a fix spray is to a painting.
Or the oven in a pottery.
Social media and marketing, and also selling and making money, are part of the art.
They are the outer layer, the bringing it into the world.
Without it, the art of writing and teaching yoga, are not completely expressed. The third skill, the business meaning the marketing, connecting, and the very act of selling, is a required one.

So those were already important insights.
But the title of this post is:
“Lauren, the writer, has joined my real-life business.”
So that is my biggest breakthrough.

The last time we talked I was already on the path of starting a coaching business, although I worded it differently (and I will continue to do so) that is what it came down to.
From there, I moved away to being a coach but in the field of yoga, which felt really good. For a few days, I really thought that coaching people through their yoga was going to be what I do.
But then I concluded that ultimately I do not want that. That for my yoga I want it to be all public via YouTube (I will be a YouTube yoga teacher);
I want it to be real-life yoga mentoring or private classes, not Zoom or online coaching;
And I want it to be public events where I am booked to teach yoga.

So the online and international yoga coaching dropped from the radar, because it just didn’t fit with the real-life work I ultimately want to do.
The real-life expression, I want my yoga to have.
Online yoga coaching would just have me isolated behind my computer and I’ve definitely had enough of that.

With yoga coaching out, I took another look at my coaching company, the framework I had already created, although not finalized yet, and I saw both that any form of regular coaching would keep me occupied behind the screen and buried in an endless list of appointments to book and rebook and coaching packages to keep up with, refund and reschedule;
As well as that I saw a HUGE opportunity!

I saw exactly the type of coaching company I want to build.

A high end coaching business, for rock stars only, or those who wish to become one. In the music business, or in any other industry where they want their skill to be one of self-expression.
To be a performance.

Anyone who knows that whatever it is they “do”, is meant to be more, mean more, and to express ALL!
It is for anyone, meaning the very few, who understand that they are here to let it all out and let their work, their art, be a full creative expression of who it is they are.

My coaching (although I will not use that word) is a 100% private, life-changing relationship (and you know I offer those to few!) that you can fall back on, when you know you’re forgetting who you came here to be, and what you’re all about.

I’m in the process of having a contract drawn up, that ensures the client confidentiality and that creates clarity and boundaries.
A contract that creates a safe space where we can meet.

This way of doing business is inspired by my love life;
Where we are lovers, who only meet when we both feel like it.
Which could end any month or year, without notice even.
He can stop asking me, and of course I will check in with him, because he’s my lover. But I will not demand a date or a continuation of what we have.

With a client I will offer the same;
A friendly check-in, but I’m not going to hard-sell them on another booking, that would feel totally inappropriate.

I need a client to take the initiative to ask for a booking.
Exactly like my lover does.

With these two interventions – focusing on creating the safe space and letting the client buy, not me sell – I feel I m setting up a coaching business that is 100% suitable for me.
And I am very confident I can meet these rock stars at the level that they are, and inspire them to rock their art even more than what they do already.

But a bonus is that it is not yoga-me, not YouTube yoga teacher me, not real life me, nor event bookings me, who offers this coaching.
It is, Lauren Harteveld.

That the person these clients will benefit the most from, is not to talk to the “real me”;
But to Lauren Harteveld, the writer, instead.
Even when I do not call myself that way over there, I will know it is her. And I do that because my writing as Lauren Harteveld is more free, and because I found my voice and true expression as a writer, 15 years before I found my true voice as a yoga teacher.
I do it because Lauren Harteveld is way more sexual, than my expression under my own name will ever be.
But there is another reason.

Because the writer Lauren Harteveld, is inspired by Catherine Tramell from Basic Instinct. I wrote a whole book about how I see her, what archetype she is and what she symbolizes, but for this blog I will focus on two aspects:
She is known to hang out with rock stars.
And she’s so wealthy she will not be impressed by anyone’s fame or wealth.

The writer Lauren Harteveld, the part of myself which I have identified as “my real self” on more than one occasion, will absolutely not show up to teach yoga. Not for any price, she just won’t come.

But to be with the rock stars of the world, and not tell a soul?
You’d be lucky, to have her.

~Lauren
An unexamined life is not worth living

Subscribe to this blog for my letters to Sara, and my 1997 diary.
The subscription button is on this page, most likely on the top right.