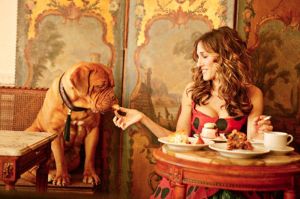 “I’m looking for love. Real love.
Ridiculous, inconvenient, consuming,
can’t-live-without-each-other love.”
.
An American Girl in Paris
(part deux)
.
No, no; This was not supposed to be a Facebook and Twitter series.
That would have saved me hours of writing and a week of frustration, until ultimately I blocked the project out of my head entirely.
Too bad I had reminders everywhere, to confirm my commitment to this new project;
My new daily schedule.
The Sex and the City dvd box set next to my couch.
A notebook that had a schedule of all the episodes I was going to cover.
And even in my agenda, I had marked the 82 days this project was going to take.
If it had actually taken place, that is..
Because it didn’t.
.
After starting this project last Monday, June 1st – hitting the ground running!- , I tripped and fell deep and hard.
Within two hours two really bad things happened, and I was lost.
I couldn’t write about them, because they were too private. Either for myself, or for other people. So my entire idea of the diary based on Sex and the City episodes, lost its appeal.
And there it went:
Sinking slowly but steadily to the bottom of my list of Projects That Inspire Me.
The only thing that reminded me of it, were those reminders.
.
So then why, on this Monday when I am making a NEW fresh start- and a WAY better one than last week – did I feel compelled to dust this off and give it a reboot in a slimmed down social media version?
.
Maybe because it was just too much fun?
Maybe because my new plans for the future, about which I will be writing here in this blog very very soon – maybe those plans scared me SO much, that I needed the soothing effect of counting my summer through Sex and the City?
Maybe.
.
So here’s what I m going to do:
.
For this series I have selected Sex and the City episodes with Mr.Big, and I will start sharing the episodes starting at the end.
.
It’s one of my guilty pleasures for reading books, or (re)watching series:
To start at the end and make my way back.
.
One of the things I ll be doing this summer (although not the thing that excites me and also scares me), is pick up harvesting all my blog posts (still/ again), and creating new books (still/ again).
In order to not have this end in super heavy files with thousands of pages – which I then abandon (again) – is by taking baby steps AND by harvesting and curating my work starting at the end of every blog, with the most recent work.
It’s so much lighter than to start with posts that are up to 10 years old.
Starting at the end is my preferred way of working, and it’s what I ll be doing with this series as well.
.
So we start at the end, season 6 episode 20, An American Girl In Paris (part deux).
And I will select a quote from Carrie.
“I’m looking for love. Real love.
Ridiculous, inconvenient, consuming, can’t-live-without-each-other love.”
.

I will post this to social media.
Then we work our way back, only the episodes with Mr. Big (41 total) and always with a quote from Carrie.
So that’s 41 quotes ending with Season 1, episode 1.
Then we switch to Mr.Big;
The next is a quote from Mr.Big, from episode one, and from there we move up.
.
From the first episode all the way to where we start today, season 6, episode 20, An American Girl in Paris part deux.
Where Mr.Big’s final quote, closing this series, will be:
“It took me a very long time to get here.”
.
Mr.Big,
An American Girl in Paris (part deux)

.
You can follow this series on Facebook and Twitter.
.
Maybe I do know why this series still appeals to me, even now that I am obviously refraining from writing that diary, as I had it all figured out one week ago.
Because something important happened, in the past week;
I stopped seeing myself as a service provider (yoga teacher, coach, entrepreneur).
I stopped seeing myself as a marketeer and sales consultant, or a content manager or anything along those lines.
My new profession (that excites me and frightens me!) is not going to have to do anything with “selling myself” nor with selling others.
It’s only about measurable, nessecary, and specialized work, based on skill.
And with that, my personality or who I am, and what I do in my free time, has become completely irrelevant for my daytime job.
To be valued exclusively and solely for my skill, and not for who I am, gives me the artistic freedom I have been looking for, for over a decade.
.
It took me a very long time to get here, indeed.
.
.

~Lauren/LS Harteveld
An Unexamined Life Is Not Worth Living