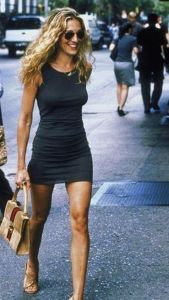 In retrospect it is all so logical.
Of course I was a secret mistress.
Of course this would be my preferred relationship form.
Of course seeing a man so little was going to keep me in love indefinitely.
Of course.

But the reality is that if you don’t have an example, a role model, it is practically impossible to know what you’re aiming for.
There is a saying in Ayurveda: your body can’t ask for flavors it doesn’t know.
It’s the same with relationships.

As long as you think a mistress is an unfortunate or evil woman who fell in love with a man who’s taken and the poor fellow can’t choose?
You’re not going to want to be that manipulative bitch or woman biting her nails in frustration.
But there is so much more to it.
Like most people I didn’t know that. I simply set one foot in front of the other, and nine years of unsatisfactory dating later, I was a mistress.
And a pretty damn good one.

Not so much technically.
I don’t think I possess anything that makes me a sex goddess, aside from relentless enthusiasm for role playing, if I get to play the submissive part.
That is literally the only thing I can possibly think of that could set me apart from other women. But there are so many men who don’t like that, or absolutely hate it. It barely counts as an asset to be that singular in your likes and dislikes.

So when I say I make a good mistress, I don’t mean I know any special tricks. Being a good mistress means (to me) that I m happy being the other woman. And although I can see it has serious drawbacks, they don’t outweigh the benefits for me.

So if I didn’t know this was the type of relationship that would ultimately suit me best, then how did I end up here?
I’m going to share which guidelines I used. They were my internal compass, from the moment I fell in love with a married man.

Fear has so many forms.
And they’ll probably all get triggered, the moment you fall in love with someone who’s taken.
Ego fears – that you’re not good enough unless he chooses you.
Fear of loneliness.
Fear of rejection by him and those around you.
“Fear” will have you settle for anyone readily available, who doesn’t bring that kind of baggage.
But only “love” will stay, regardless of the risks.
I never regretted it.

Like I said, I had been dating for nine years before I became a mistress.
I knew exactly how straining sex, dating, hanging out, being boyfriend and girlfriend, anything to putting your order in at the cafeteria, could be when you are with someone you don’t totally admire and are not absolutely fascinated with.
Nor he with you.

But this time I was with someone I actually liked, and he also liked me back!
After nine years of dating men who were often available, kind, and loving, yet with whom things ultimately always turned sour in some way because we didn’t love each other enough;
I now recognized Love immediately.
I wasn’t going to let Fear ruin my party.

#2 Don’t take love away from anyone. Not even yourself.

I’ll admit that when we started out I assumed it was a matter of weeks before he’d choose me. And although I stayed true to my own internal compass, and never pressed him to leave her, nor did I give him an ultimatum – in fact we didn’t even discuss the matter – I was disappointed.
It wasn’t easy to deal with not being The New Chosen One.
Until I realized how much damage it would do, if he actually did get a divorce. How he and his family would have to deal with that tragedy. It immediately became clear to me, that I never wanted that for anyone.
Not for him, and his family.
Not for me.

This rule, to not take love away from anyone, has been the most important guideline.

Anything that is important to him, is important to me.
Period.
Whether it’s work, or his family: I will not ask to be prioritized ever.
We had a children’s book with stories from Andersen, and it had a story:
What father does is always right.
About a man who made illogical decisions but ultimately made a lot of money because his wife stood beside him, and he took a bet that his wife would be delighted when he came home from a seemingly unfortunate deal he had made.
I am that “wife”:
I will never question my lover’s ability to make the right decisions.

#4 Don’t obsess over getting a giraffe

What I have is a loving relationship with the man I love, who loves me back, and after three and a half years I m still very much in love.
And yet.
So many people would trade that for having a loving relationship with someone they love, who loves them back and THAT DOESN’T EVEN EXIST.
They compare what they have, with something or someone that isn’t there.
I’m not saying you should settle. Never settle! Not when it comes to how much love there is between you, or how he makes you feel.
Don’t settle for someone whose order at the cafeteria you can’t stand.
But if you’ve found someone you like, and he likes you back, then why do you keep obsessing over getting one just like it, but single?
He’s not single!

I compare it to going on safari and you see hunting lions, and elephants with calf, the last white rhino and you get to play with the chimpanzees and yet you want your money back because you didn’t see giraffes.
You can only see a safari as successful if there were giraffes, and therefor didn’t enjoy any of the other animals.

They could both be considered a success, it just depends on how you look at it.

{ to keep these little gems aka blogposts from hijacking my day I set the intention to write them in sixty minutes. This one was written in written in 2,75 hours. }